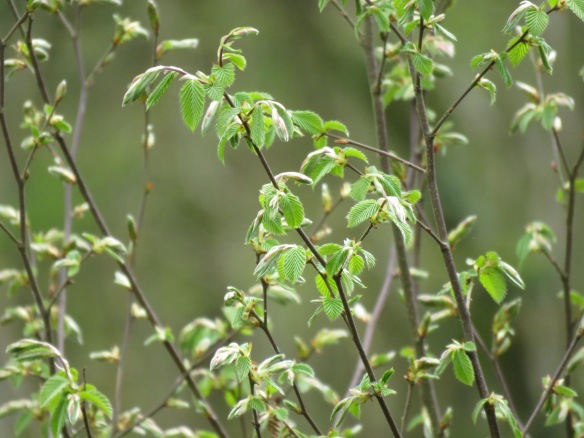 A short survey of our 2016 coppice coupe (brambles permitting) showed that three of our six experimental Hornbeam coppices have survived. This is a slightly disappointing result, but the surviving coppice stools are doing very well, and we found many hornbeam seedlings that have taken advantage of the sunlight and warmth in the coupe. Despite being a shade-tolerant tree it is noticeable that those that failed had the least direct sunlight. A long dry spell in 2017 may not have helped, one stool showed promising regrowth in the first year but was looking very poorly by the end of 2017.

There is a risk whatever we do. If we do nothing the old coppices will eventually fall apart under the weight of mature stems and die. Traditionally, re-coppicing Hornbeam every thirty years or so preserved these old stools sometimes for centuries. But the longer the interval between coppicing, the greater the chances of failure. Some say that after 50 years it is not worth re-coppicing neglected stands. Our Hornbeams had been re-growing for 60 years when we re-coppiced them and only half failed. We would argue that the general benefits of coppicing made the experiment worthwhile. As well as an increase in natural Hornbeam regeneration, this coupe also produced the first Oak seedlings in Lag Wood for decades.

It is also worth recording that there were three old Hornbeam stools of a similar age which we coppiced in our 2018 coupe. All three are in good sunlit positions and have abundant regrowth over a year later (see pic below). Old coppiced Hornbeam is part of the distinctive character of Lag Wood. All these survivors will help to preserve that character for many decades to come. 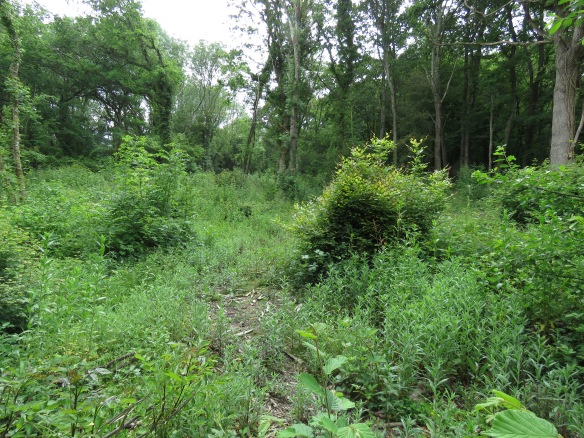 Roe Deer remain frequent visitors to Lag Wood and continue to be a threat to recently cut coppices in the first two or three years of regrowth. They also seem to have a partiality to naturally regenerating Ash which we are keen to protect in the hope that some of this natural regeneration may be resistant to Ash Dieback. Keeping Roe out of the wood completely would be difficult and unlikely to be fully successful. But we will keep up our use of temporary deer fence which seems to have been very effective in protecting recently coppiced coupes.

Part of our first coppice coupe after ride clearance in 2018

Known to us by the catchy title of Sub-Compartment 1g, we completed coppicing this coupe in March 2015. It runs alongside the east-west path through the wood with the little bench around half way along. Part of this area had been coppiced for Hazel in the winters between 1998 and 2000 when Hazel coppicing took place in a broad band all along this east-west path (which we have christened “Bench Lane”). Tree rings counted during our coppicing in 2015 showed that Sweet Chestnut, Birch, Willow and Ash stools in this coupe were last coppiced around 1955. The presence of several mature Oaks and the density of old Hazel stools suggests that, like most of Lag Wood, a coppice-with-standards regime had been in place for some very considerable time before the 1950s.

The main headlines from our survey: The Hazel coppices show robust and abundant regrowth. A very small proportion of our Hazel stools were lost. Our experiment with “layering” hazel was successful. “Layering” is a means of producing new stools by cutting a single stem in such a way as to lay it flat to the ground while still attached to its root system. The “layer” stem will then produce new roots and ultimately new coppice stools.

Our worries about coppicing Sweet Chestnut were unfounded. There are only two of them in Lag Wood and we did not want to lose one of them, but the one we coppiced regrew quite spectacularly and continues to do so.

All of the 13 Ash stools we coppiced are now affected by Ash Dieback, although there is abundant natural regeneration of Ash in the ground layer. Some of these appear to be more than one year old and are healthy, so far at least. “Singling” Ash does not appear to have slowed the disease. “Singling” means coppicing an old coppice stool but leaving one more mature stem in place.

Other tree species coppiced appear to have regrown well including one young Hornbeam sapling that had been ring-barked by squirrels. There is a patch of natural Birch regeneration in the north-west of the coupe which is becoming overgrown by Hazel. The willows appear to be in excellent health despite one or two of them being re-coppiced twice during ride management subsequent to 2015 (see pic above). In terms of tree species diversity, Field Maple looks like being a key beneficiary of coppicing here and throughout the wood but even this shade-tolerant mid-storey tree needs some light. The seven mature Oaks in the coupe are all healthy and squirrel damage seems more limited this year.

The ground flora remains diverse and Twayblades have unexpectedly appeared in the coupe. Understandably, ground flora is no-longer as abundant as it was in the years immediately following coppicing, but the dominance of brambles found in the following year’s coupe is nowhere near as marked in this one.

Our use of coppice protectors (see pic below) instead of deer fence seems to have been reasonably effective. Unfortunately coppice protectors are laborious to install and extremely fiddly to remove three years later. We may use them again but not en-masse as we did in 2015.

The density of Hazel regrowth may now be inhibiting some slower growing tree species and ground flora. Re-coppicing this coupe, or part of it, this coming winter may have several benefits if coppicing is restricted to Hazel only. It would assist areas of Field Maple, Birch and Ash regeneration – the latter should be encouraged as some natural regeneration may be resistant to Ash Dieback. Ground flora would also benefit. A watch should be kept for excessive bramble growth in subsequent years. Apart from the presence of Ash Dieback, the coupe has progressed as we hoped and we are pleased with the outcome.

The coupe after coppicing in 2015