We are very pleased to say a huge thank you to the South Downs National Park volunteers and lead ranger Phillippa Morrison-Price who continue give us so much support, advice and sheer effort especially in maintaining our locally unique meadow. A great pleasure to see you again. Phillippa is on twitter  @Ranger_sdnpa ‏ 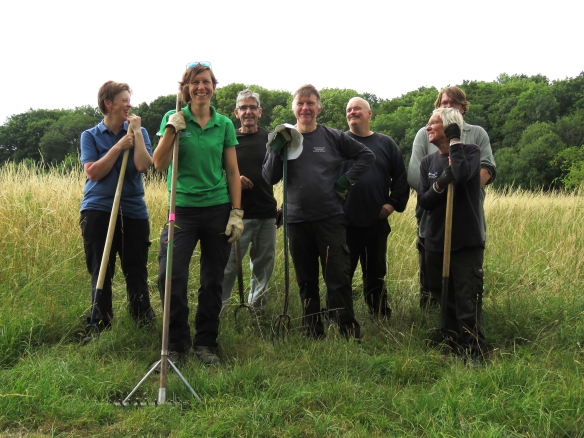 Mid-summer, half way between coppicing seasons, and it is a good time to reflect. Lag Wood is unusually quiet. Our birds have made good use of the canopy’s great spring feast of caterpillars and a motley assortment of scruffy fledglings have long since fluttered from nests hidden deep in brash piles, brambles and the leafier parts of the mid-storey where hazel and hornbeam meet ash and oak. A pair of Mistle Thrushes joined us in March and are still a common sight hunting for insects in the meadow.

Mistle Thrush in the meadow (June)

Coppicing and ride management are working their magic on the wood. Damselflies are now a common sight in sunny spots along our rides. Azure and Large Red damselflies have this year joined the exotic Beautiful Demoiselles with their iridescent black wings and metallic blue bodies. Flowers like Ragged Robin, never before recorded here, boomed in late spring along our east-west ride.

Ragged Robin on the ride-side near the bench (May)

Standing dead wood is important for a variety of insect life, especially beetles, and all who feed on them. The large dead Oak standing in the 2015 coppices succumbed to Oak Bracket fungus and is now a metropolis for beetles. Many beetle species cannot live without these dry woody habitats. Wasp Beetles and Black Headed Cardinals have been seen for the first time this year.

Perhaps the most uplifting sight so far this year was the pair of Long-Tailed Tits who reared a successful brood in the brambles a few feet from our hut. 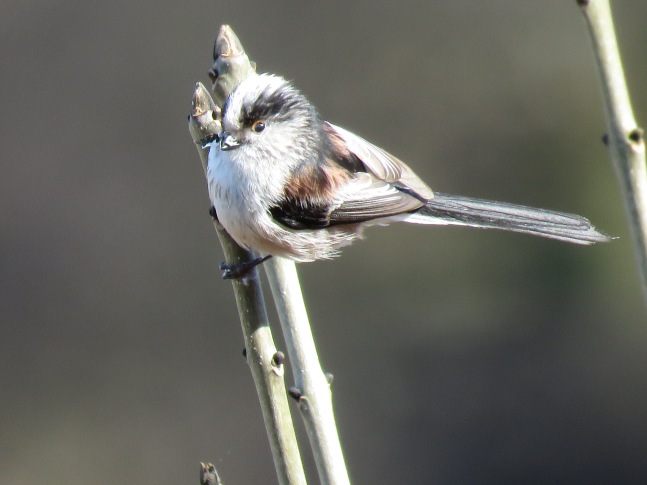 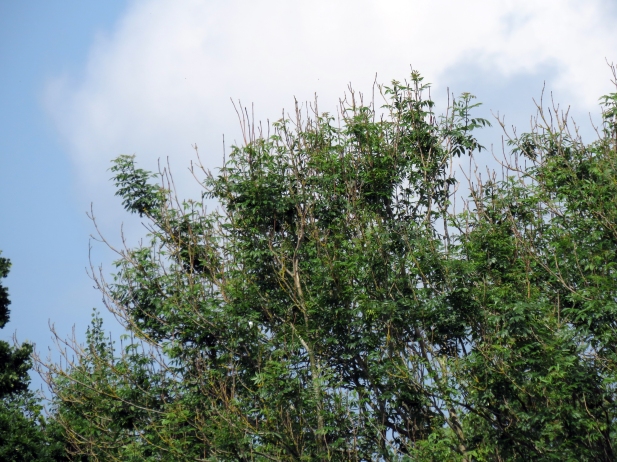 Sadly, Chalara Ash Dieback continues to spread not only in Lag Wood but is now visible in woods and roadsides all around this part of Sussex. We surveyed in June and found around 30% of our Ash showed the classic signs of leaf loss at the margins of the crown. The picture above shows the crown of our largest veteran Ash coppice by the source of the stream. The disease has already seen off many of our Ash saplings and has affected coppice regrowth. We can do little other than monitor its progress, but we may fell some selected Ash trees this winter as a precautionary measure. On a happier note, Oak regeneration can now be seen on the ride-sides and coppices where before there was none. Hazel, Hornbeam, Field Maple, Hawthorn, Willow and Sweet Chestnut all show abundant coppice regrowth and there are frequent new saplings. Ash Dieback will affect the character of this wood. But it will also create new niches for other species to thrive.